The Road to A Better Guest Experience 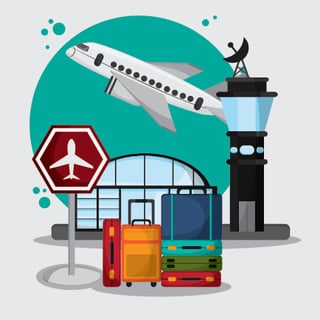 A positive customer airport experience starts well before getting to the terminal.  Whether traveler or employee, efficient and safe roadway operations are critical to an airport's success. All airport visitors expect safe and efficient roadway operations even as volumes increase, but often the design and capacity of the terminal and landside infrastructure cannot maintain those expectations.

In 2010, the Airport Cooperative Research Program (ACRP) published the Airport Curbside and Terminal Area Roadway Operations manual, citing the importance of understanding how our national airports connect with other modes of transportation.  They also point out where the nation's aviation system connects with other modes of transportation and where federal responsibility for managing and regulating air traffic operations intersects with the role of state and local governments that own and operate most airports.

If you've ever found yourself in a traffic jam around an airport and missed your flight, you'll appreciate the thoroughness of this report.  Just ask the travelers around LaGuardia Airport airport a few weeks ago. The "perfect storm" of delayed in-bound flights from bad weather combined with a car fire and already heavy travel times, caused travelers to wait hours in traffic as well as overflowing security lines.

But this trouble isn't simply reserved for harried travelers.  Airport employees (numbering in the thousands in many airports) must navigate, sometimes on a daily basis, the inefficient roadways and transportation systems surrounding many terminals.

LAX is responding to this ever-increasing headache with a $5.5 billion dollar solution.  Their efforts depict the heightened demand for efficiency in travel to airports for both passengers and employees. Their innovative landside access modernization program, or LAMP, will include the construction of the US's largest rental car facility and a 2.4-mile automated people mover (APM) system with six stations.

A year into her tenure leading the organization that oversees LAX following a five-year stint running Oakland International Airport (OAK), Flint is candidly acknowledging the gateway airport's shortcomings, especially compared to modern Asian airports from which many LAX-bound passengers are connecting. "Efficiency of operations is the new currency of airports," she told the International Aviation Club of Washington DC.

Flint noted that LAX ranks 91st among world airports in Skytrax rankings. Global travelers now expect elaborate gardens, yoga rooms, and fine dining in international airports, she said. LAX has to achieve "an exponential level of progress" in improvements, Flint said, noting that "the expectation is not going to change for passengers."

Passengers encounter a great deal of congestion and frustration even before arriving at LAX, Flint noted, pointing to complicated roadway access that includes 30 separate rental car facilities. "We need to make huge improvements on our landside," she said.

Construction on the LAMP project is slated to start next year and be completed by 2023, in time for the 2024 Summer Olympics should the games come to Los Angeles, Flint said. On the day LAMP opens, "40% of the [road] traffic congestion at the airport will be removed," she added.

But building new facilities is just one component of appealing to future passengers, Flint cautioned. She said future passengers will expect to be connected to airports and airlines end-to-end via personal electronic devices. "Tomorrow's passenger is going to expect that the entire journey is going to be one integrated experience," Flint explained.

Pointing to "automated" passenger screening lanes—also known as "innovation lanes"—that the US Transportation Security Administration is going to deploy at LAX and three other major US airports later this year, Flint said the new lanes are a welcome development but just a start. "The checkpoint of the future is more than innovation lanes," she explained. "Tomorrow's checkpoint is more than anything we're seeing today. I hope that checkpoint of the future has no ‘point'—it's free-flowing."

Like LAX, Customer Service Experts is dedicated to helping clients improve their airport guest experience.  Check out the below links for more information about how CSE could help you today: